Reality of what the Protest Was - Compared to the Final Takedown

On Ash Wednesday, March 2nd, police violently removed the protestors camped outside of Parliament that had been there since arriving by convoy.

The protest had arrived at Parliament on 8th February with the initial convoy that came from all parts of the country.  People had come to protest against the seemingly never-ending mandates and restrictions placed upon New Zealander's lives for the last two years.

It is very likely that Jacinda Ardern, after earlier declaring the protest was not a protest, had decided the protestors must go; and having made her wishes clear, it was inevitable it would be ended by police, no matter what. 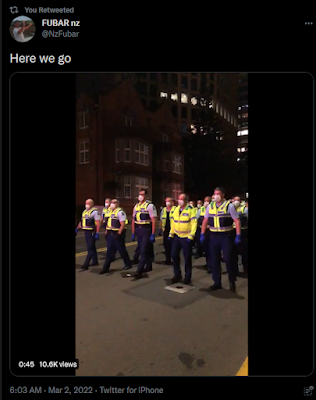 However, it wasn't until just before 4pm, when my husband asked me if I'd seen what was happening at the protest, that I loaded the latest Stuff live feed to see what he meant. I had prayed the Rosary earlier for the protest and for all of New Zealand, but for some reason hadn't kept up with what had been happening on the ground.  It was complete destruction from what I could see before the feed was taken down soon after I tweeted the last few images. 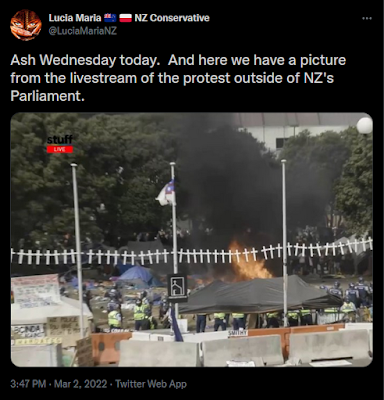 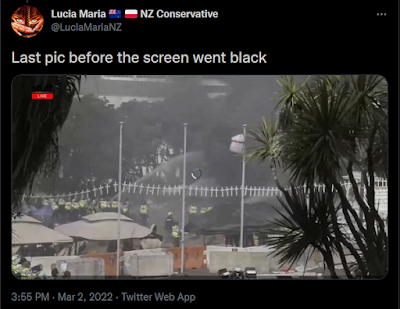 The night before I had said on Twitter, that if the threats of police action were true, then "we will know that dissent against Jacinda Ardern's government will not be tolerated." 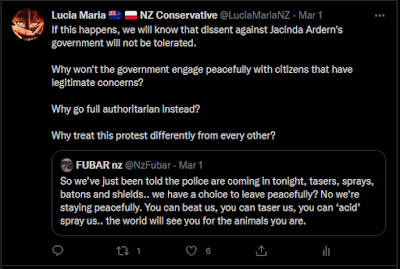 When it was over, everything the protestors had built was trampled, set on fire or just removed. Parliament and the surrounding area looked like the remains of a war-zone.

The Real Camp Freedom, Wellington, New Zealand & The Police Violence That Shut It Down

Was initially inspired to write this post because of this recently published, incredibly moving video that hauntingly contrasts the peaceful protest of a few days prior with the final brutality that occured on Ash Wednesday.

It's a powerful video of the type that will have detractors screaming 'misinformation' and 'PR campaign'!! That is all they've got when it comes down to it; nothing but smears in an attempt take back control of the narrative into the hands of the government spin doctors and their minions.

Compare the video above with this one-sided video from One News, showing the protest in a way that would please Jacinda Ardern.

Too ashamed to engage with those she sought to ignore, instead Jacinda Ardern sets the police on the protestors in such a way that violence ensues.  Then blames them for everything unleashed upon them and accuses them of what she herself is guilty of: her own lack of values and inability to act as a proper representative of Parliamentary Democracy in NZ.

Now it is obvious to me that we are in very, dark times that are only going to get even darker. Any hope of an alternative reality is now totally quashed. It was albeit a very, small hope, but it was still there nonetheless until last Wednesday. Now there is certainty of the darkness to come.  This is NOT how a democratic nation acts against a peaceful protest. This is how tyrants act.  This how the guilty act.

Pre-pandemic times are not coming back; the events of Ash Wednesday prove that categorically.  Complying will not bring those times back; neither will trying to wake up the masses - it's too far gone now.  Fleeing to other countries will not help either, unless you are wealthy enough to skip around as things change; and even then, good luck to you. For most of us, we will just have to prepare for what is coming where we are. As I will be doing in the coming weeks and months.

When all seems lost and hopeless, there is still good to be found.  So, while I now understand the situation with more clarity, I have realised that the only way to get through this is to pray. Human strength alone is not enough to get through this.

The date of the protest take down was serendipitous; it happened on Ash Wednesday, which is the start of Lent, a period of repentance in preparation for the greatest event of history itself.  And therefore a real sign that our suffering can be transformed to the good. God is with us through of this and will NOT abandon us.