Shakespeare may be removed from the curriculum [Update 2] 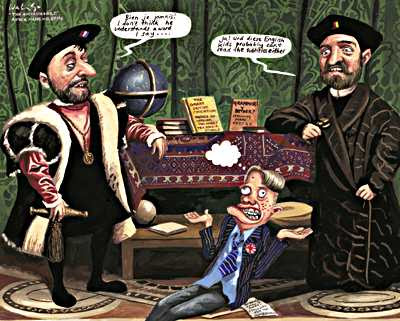 English school-boy has no idea what his ancestors are talking about
- from The Spectator, 2001

Wow. Shakespeare may be removed from the school curriculum and replaced with (drum roll, please) the study of blogs!

Are the curriculum people insane? No. They know that when you remove content that is measurable and well-studied and replace it with stuff that few people read, then you have no objective way of ensuring standards of teaching are being met and children are being taught anything worthwhile. So, you leave the door open for individual ideologies to be taught instead.

You can therefore create a generation of people who know very little, but think they are well-educated These sorts of people are very easily controlled.

UPDATE: I wonder if the potential removal of Shakespeare from schools is influenced in a large part by his biblical world view?


The influence of a Biblical worldview is evident throughout Shakespeare’s work. His plots are ripe with Biblical principles, lessons and truths. Take, for example, this short summary of themes from some of his most famous plays. Hamlet deals with the theme of revenge, and teaches that “Vengeance is mine, I will repay, says the Lord” (Rom. 12:19); “All who take the sword will perish by the sword” (Matt. 26:52) Measure for Measure takes its title from Matt. 7:2 and teaches the reader: “Judge not, that you be not judged. For with the judgment you pronounce you will be judged, and the measure you give will be the measure you get” (Matt. 7:1-2). Macbeth demonstrates the dangers of ambition, and the Biblical truths: “Pride goes before destruction, and a haughty spirit before a fall” (Prov. 16:18); “For what does it profit it man if he gains the whole world and loses his soul” (Matt. 16:26; Mk. 8:36; Lk. 9:25). Much Ado about Nothing deals with the theme of deceptive appearances and warns the reader: “Do not judge by appearances, but judge with right judgment” (Jn. 7:24); “The LORD sees not as man sees; man looks on the outward appearance, but the LORD looks on the heart” (1 Sam. 16:7). The Merchant of Venice conveys a message of mercy and demonstrates the Gospel truth that: “Judgment is without mercy to one who has shown no mercy; yet mercy triumphs over judgment” (Jas. 2:13)


UPDATE 2: Looks like we are merely copying our English forebearers in dropping Shakespeare. In 2001, Philip Hensher wrote in The Spectator (link changed May 2016 as original no longer exists - Lucia Maria):


In a way, anyone who thinks the lower classes have been getting above themselves lately ought to raise a glass to the educational authorities in this country. Even if you aren't given to conspiracy theories, it is hard to suppress the thought that the Qualifications and Curriculum Authority, the government's advisory board on state education, is pursuing a long-term class war of devilish ingenuity. Let's not educate them; let's keep them ignorant; let's discourage them from ever reading a book; and we, the leisured rich, will face a future of lolling in our red-velvet dressing-gowns, fed Turkish Delight by a whole generation of illiterate, epsilon-minus semi-morons.

His whole article is a must-read.